Poet Bio:
Shel Silverstein (1930-1999) mastered several areas of literature during his lifetime, including children’s poetry and prose, cartoons, and songwriting. Although he has produced literature for people of all ages, he may be best known for his children’s poetry books Where the Sidewalk Ends, A Light in the Attic, and Falling Up. Using his peculiar, whimsical style, he created children’s poems that are silly, strange, and truly funny to both children and adults.
-Information from About the Author: Meet Shel Silverstein by S. Ward

A poem by Shel Silverstein: 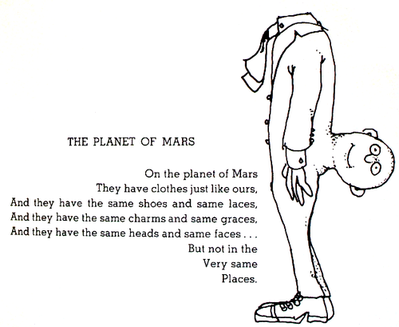 Excerpt from Where the Sidewalk Ends
By: Shel Silverstein
Poem Analysis:
In “The Planet of Mars,” published in his book of poetry Where the Sidewalk Ends, Silverstein imaginatively considers life on other planets. The tone is informal and light, and the theme of the short poem is that Martians are basically the same as Earthlings. He uses parallelism on the middle lines to add poetic style and emphasis. In the last line of the poem, he alludes to the one small, yet extreme, difference between the people of the two planets, the location of their heads. Silverstein's illustration completes the poem and adds a layer of humor.

A poem by me 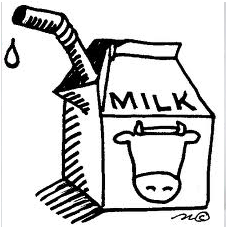 How am I supposed to sleep

Under these harsh conditions

You shook up my bedtime milk

All in the wrong positions

Then chocolate tops it off

Until you mix it that way

I will yell and cry and cough

How my poem is like Shel Silverstein's poetry:
Many of Shel Silverstein’s poems are written either from a child’s point of view or on topics that children find amusing. In my poem, “Bedtime Milk,” I attempted to capture the point of view of a child by channeling a real life source, my three-year-old little brother. I have learned recently that a child’s bedtime ritual is very important; if it is disrupted in any way, there may be terrible consequences. Recently, my little brother spent the night with me, and the subject of “Bedtime Milk” was major concern of his.

A little about me:
I grew up in Ada, OK, and I have lived in the Oklahoma City metro since beginning college. I have two brothers, ages 31 and 3. My educational history is in religious studies, and I am currently a pre-med student majoring in biology at the University of Central Oklahoma. I have been accepted to a medical school, which will begin this fall, so I will most likely be moving to Kansas City this summer with my boyfriend, Ryan.